This was the name given by local children

to the West Port Garden which opened in 1910. At the time the West Port was a cavernous street of soot-blackened tenements, running uphill from the Grassmarket. Inspiration came from pioneer ecologist Patrick Geddes whose vision was to create
green spaces among the Old Town slums. Here children could play safely and experience the natural world through gardening. A century later the West Port Gardening Group of the local residents’ association is renewing Geddes’ vision by creating a green space for everyone to enjoy.

The Garden was an initiative of 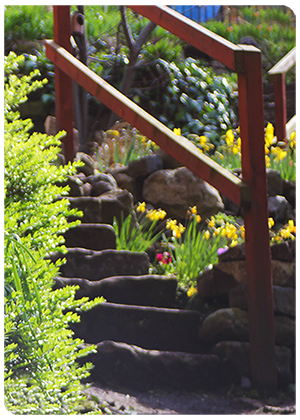 Geddes’ Open Spaces Committee. It was organised and
managed largely by ‘a band of devoted ladies’ including Geddes’ daughter, Norah. A talented
landscape designer, she created a series of terraces on the steeply sloping site to provide
flower gardens, vegetable plots and play areas for children.

Over the years a hundred children regularly tended their plants, kicked footballs and enjoyed supervised play and summer outings. By 1924 there were sufficient funds to build a Club Hut where the Scouts met, girls learned to knit and
the Army taught older boys boxing. The site later acquired an electricity sub-station and a ‘Tardis’ police box. In the 1950s Edinburgh Council took over the Garden.

Developing and managing green spaces has always been a priority for GRASS (Grassmarket Residents’ Association) as many local people do not have access to a garden. GRASS celebrated the handover of the key to the West Port Garden from its partner, the City of Edinburgh Council in April, 2013.

With help from the Council’s gardening experts, a team of volunteers has transformed the space into a community garden. The first season was spent hacking back the undergrowth and filling countless sacks with weeds. They researched the Garden’s history and raised funds for future development. Now they are at the exciting stage of planting for colour and variety and installing bird boxes, vegetable planters, seating and our own garden shed. The hard work of weeding, pruning and
repairing walls continues.

If you would like to find out more about the Garden or to join the Gardening Group, email Portsburghgardeners.2013@gmail.com or come along one Sunday afternoon.

This site uses Akismet to reduce spam. Learn how your comment data is processed.